Russian 5 is designed as a continuation of Russian 4 and promotes pronunciation and grammar, as well as the development of listening, speaking, reading, and writing skills. The course aims to expand the oral and written communication skills acquired in earlier classes and to broaden students’ understanding of the cultures of the Russian-speaking world. Grammatical concepts are reviewed and expanded. Students will be exposed to aspects of Russian culture and literature via music, movies and written texts. Topics include, but are not limited to, daily routine, housing, hobbies, movies and theater, and music. Students will participate in various classroom activities, including small groups and pair work, and oral presentations to give them ample opportunities to practice Russian. 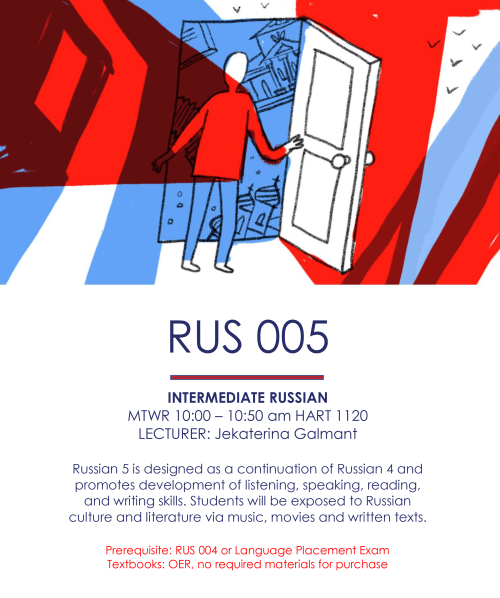 The 19th century is when Russian Literature – comparatively quite late – comes to the scene of world literature and rapidly takes a central stage. This course is devoted to a close reading and cultural interpretation of the works by four masters of nineteenth-century Russian literature: Alexander Pushkin, Mikhail Lermontov, Feodor Dostoevsky, and Lev Tolstoy. Pushkin and Lermontov represent the novel’s origins in Russian Romanticism, while Dostoevsky and Tolstoy represent the pinnacle of the novel’s development in the age of Realism. Given the century’s predilection toward the novel as a literary form, the course will revolve around the following questions: what is a (Russian) novel? What does a novel do, and how does it evolve through time? What is the novel’s connection to the politics and society of nineteenth-century Russia? Among the central concerns of the course will be the questions of particularity of Russian modernity and Russian national/imperial identity vis-à-vis Europe.

At the end of this course, students will have acquired a basic understanding of the history and politics of nineteenth-century Russian literary culture, as well as its general legacy; become able to understand and employ several theories of the novel; strengthened their reading and writing skills through training to read primary texts closely and analytically.

Taught in English, no knowledge of Russian required (interested students may sign up for an additional unit to meet and discuss the texts in the original Russian). 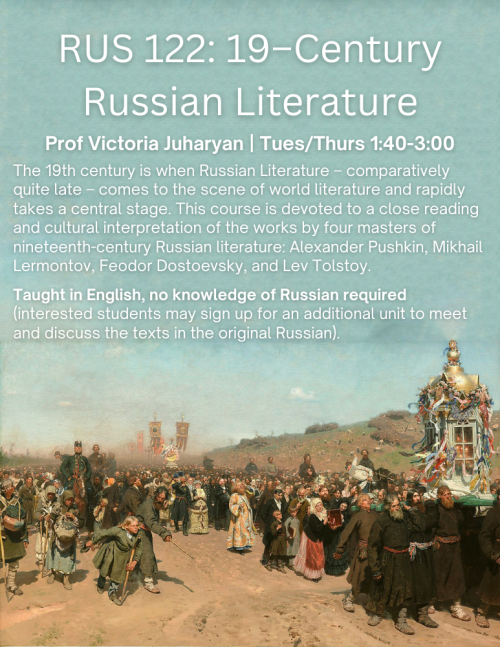 This course provides an overview of the history of Russian film—famously designated by Vladimir Lenin as “the most important of all the arts”—from the early years of the Soviet Union to the post-Soviet period. Beginning with Sergei Eisenstein’s landmark film Battleship Potemkin (1925), widely acknowledged as one of the best movies ever made, we will watch representative films from the major periods of the Soviet Union’s tumultuous history, including: the Stalin era (1929-1953); the Thaw of the 1950s and 1960s; the Stagnation of the 1970s and 1980s; perestroika and glasnost’ of the 1980s; and the post-Soviet period (after the collapse of the USSR in 1991). We will explore the intersections between cinema and Soviet/Russian society while also honing our knowledge of cinematic language and the particularities of cinema as an art form. The contributions of Russia’s great auteur director, Andrei Tarkovsky, will also be considered. All films will be available with English subtitles. No knowledge of Russian required.